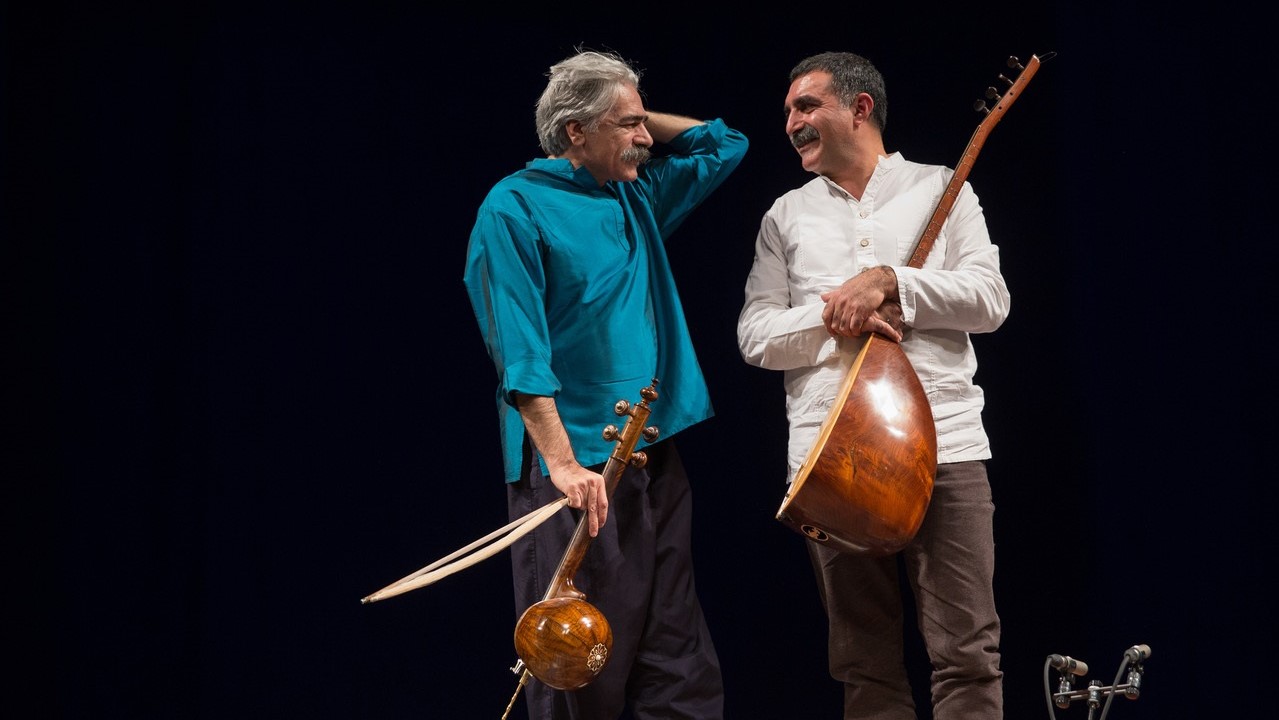 This concert brings together two virtuoso musicians steeped in the traditional music of their
respective cultures – Persia (Iran) and Anatolia (Turkey). The classical music traditions of Persia
and that of Ottoman Turkey have much in common. They share the ancient modal compositional
system known as maqam and improvisation plays a definitive role in performance. Likewise, the
regional folk musics of these two countries have much in common: the similarity of instruments
such as the Kurdish and Persian tanbur and setar to the Turkish saz, the strumming techniques
used for these instruments, and the high keening vocal techniques so common to mountainous
lands and used by singers throughout this vast area. The music performed by these two musicians,
while derived from ancient roots, is thoroughly modern. It is purely instrumental which is a
considerable deviation from tradition in both cultures where the singer is considered pre-eminent.
While traditionally sung poetry is an integral aspect of virtually all Middle Eastern music, in this
case it is the sound of the instruments that delivers the poetry. This more abstract manner of
conveying emotion and spirituality has always been present in Eastern music; instrumental music
in India has long been at the service of vocal music and the most esteemed instrumental style in
North India is that which approximates to the human voice. In vocal music from the Arab world to
Iran and India, accompanying instruments seek to imitate the nuances of the voice, often repeating
melodic phrases or acting as bridges between stanzas. The music of Erdal Erzincan and Kayhan
Kalhor is intensely spiritual and emotional; it is like a prayer. It seeks to bring the listener into its
trance-like realm by interweaving ecstatic rhythms with lush melodic phrases.

Kayhan Kalhor is an internationally acclaimed virtuoso on the kamancheh (spiked fiddle), who
through his many musical collaborations has been instrumental in popularizing Persian music in
the West and is a creative force in today’s music scene. His performances of traditional Persian
music and multiple collaborations have attracted audiences around the globe. He has studied the
music of Iran’s many regions, in particular those of Khorason and Kordestan, and has toured the
world as a soloist with various ensembles and orchestras including the New York Philharmonic
and the Orchestre National de Lyon.
He is co-founder of the renowned ensembles Dastan Ensemble, Masters of Persian Music with
Mohammad Reza Shajarian, Hossein Alizadeh and Homayoun Shajarian; the Persian-Indian
ensemble Ghazal with Shujaat Hussain Khan and for his pioneering work with Erdal Erzincan and
Rembrandt Ensemble. Kalhor has composed works for Iran’s most renowned vocalists Mohammad
Reza Shajarian and Shahram Nazeri and has also performed and recorded with Iran’s greatest
instrumentalists.
He has composed music for television and film and was featured on the soundtrack of Francis Ford
Copolla’s Youth Without Youth in a score that he collaborated on with Osvaldo Golijov as well as
for many Iranian films. His commissions include works written for the Kronos Quartet and for YoYo Ma’s Silk Road Project, with whom he continues to compose for, record with, and tour. His
compositions appear on all of the Silk Road Ensemble’s albums. Of his two dozen albums, the
most recent is It’s Still Autumn is with the Rembrandt Frerichs Trio (2019). Other albums include
Silent City, a collaboration with Brooklyn Rider, I Will Not Stand Alone with santoor player Ali
Bahrami Fard, three albums on ECM: two with Erdal Erzincan and one with Ghazal Ensemble,
three Ghazal albums on Shanachie, and three Masters of Persian Music on the World Village label.
Kayhan has been nominated for three Grammys and in 2017, he was awarded a Grammy with YoYo Ma and the Silk Road Ensemble (2017).
In 2002 he was nominated for a BBC Radio 3 World Music Award; In 2005 he was awarded the
Preis der deutschen Schallplattenkritik (“German Record Critics’ Award”); five of his recordings
have been nominated for Grammys and in 2017 he was awarded a Grammy.
John Adams invited him to give a solo recital at Carnegie Hall in 2004 as part of his Perspectives
Series and he has appeared on a double bill at Lincoln Center’s Mostly Mozart Festival, sharing
the program with the Festival Orchestra performing the Mozart Requiem.
In 2018 he was awarded the prestigious Isaac Stern Human Spirit Award in Shanghai, created to
recognize an individual or group - in any field and from any part of the world - who is deemed to
have made an outstanding contribution to the understanding of humanity through the medium of
music.

Erdal Erzincan, a disciple of the legendary Arif Sag, is one of the most well-known folk
musicians of his generation in Turkey. Born in Erzurum in 1971, he became interested in the
region’s folk music at an early age. In 1985, he moved to Istanbul to study at the Istanbul
Conservatory and the Arif Sag Music School. Erzincan has made numerous recordings, both as a
solo artist and as an accompanist, some of which have become best-selling albums. His
collaborations include concerts with Arif Sag and the Koln Philharmonic, and with the Ambassade
Symphony Orchester Wien (an ensemble of the Vienna Symphony Orchestra). Erzincan has
performed and taught throughout the world and founded the Baglama Music Academy in Istanbul
where he leads a baglama orchestra comprised of his students. He has two recordings on the ECM
label with Kayhan Kalhor.

Kamancheh
The kamancheh or spike fiddle, the ancient bowed string instrument of Iran, is ancestor to most
bowed instruments throughout Asia and Europe. It has a small hollowed belly made of walnut or
mulberry wood with a thin stretched skin covering and a conical shaped neck. The modern
kamancheh has four strings, generally tuned in fourths or fifths, and is held vertically.

Baglama
If a single instrument were to represent Anatolian folk music it would be the baglama, a lute also
known by the generic term saz which literally means “instrument.” The baglama, used in religious
ceremonies as well is folk music, is a pear-shaped plucked lute that comes in various sizes and
with varying numbers of strings. The favored instrument of the Alevi (a Sufi sect in Turkey and its
largest religious minority community) has three courses of strings arranged 2-2-3. It may be tuned
in fourths or fifths but there are a number of other tunings. The body of the modern baglama is
made of strips of juniper with a spruce sounding board and a kelebek hardwood fingerboard.